Kurzbeschreibung:
One day you know more dead people that live ones…

Jess Walter is a writer with a rare talent for finding humanity and emotional truths in lives lived on both sides of the law. With his third novel, Citizen Vince, Walter has crafted a story as inventive as it is suspenseful — an irresistible tale about the price of freedom and the mystery of salvation.

It’s the fall of 1980, eight days before a presidential election that pits the downtrodden Jimmy Carter against the suspiciously sunny Ronald Reagan (”Are you better off than you were four years ago?”). In a quiet house in Spokane, Washington, Vince Camden wakes up at 1:59 a.m., pockets his weekly stash of stolen credit cards, and drops in on an all-night poker game with his low-life friends on his way to his witness-protection job dusting crullers at Donut Make You Hungry. This is the sum of Vince’s new life: donuts, forged credit cards, marijuana smuggled in jars of volcanic ash, and a neurotic hooker girlfriend who dreams of being a real estate agent.

But when a familiar face shows up in town, Vince realizes that no matter how far you think you’ve run from your past . . . it’s always close behind you. Over the course of the next unforgettable week, on the run from Spokane to New York’s Lower East Side, Vince Camden will negotiate a maze of obsessive cops, eager politicians, and emerging mobsters, only to find that redemption might just exist in — of all places — a voting booth.

Theresa Schwegel graduated from Loyola University and earned an MFA in film at Chapman University. Born and raised in Chicago, she now lives in L.A. This is her first novel.

Jeffrey Ford : The Girl in the Glass
(Verlag: Dark Alley)

Kurzbeschreibung:
The Great Depression has bound a nation in despair — and only a privileged few have risen above it: the exorbitantly wealthy … and the hucksters who feed upon them. Diego, a seventeen-year-old illegal Mexican immigrant, owes his salvation to master grifter Thomas Schell. Together with Schell’s gruff and powerful partner, they sail comfortably through hard times, scamming New York’s grieving rich with elaborate, ingeniously staged séances — until an impossible occurrence changes everything.

While “communing with spirits,” Schell sees an image of a young girl in a pane of glass, silently entreating the con man for help. Though well aware that his otherworldly “powers” are a sham, Schell inexplicably offers his services to help find the lost child — drawing Diego along with him into a tangled maze of deadly secrets and terrible experimentation.

At once a hypnotically compelling mystery and a stunningly evocative portrait of Depression-era New York, “The Girl in the Glass” is a masterly literary adventure from a writer of exemplary vision and skill.

Kurzbeschreibung:
In 1930 a plucky girl detective stepped out of her shiny blue roadster, dressed in a smart tweed suit, ready to restore a stolen inheritance to its rightful owner. Tied up by the villains, she managed to free herself and bring them to justice – all while wearing a pencil skirt and high heels. Eighty million books later, Nancy Drew has survived the Depression, World War II, and the sixties (when she was taken up with a vengeance by women’s libbers), and emerged as beloved by girls today as she was by their grandmothers. Now, in a narrative with all the fast-paced thrill of one of Nancy’s adventures, Melanie Rehak solves a page-turning literary mystery: Who created Nancy Drew? And how did she go from pulp heroine to American icon?

With ebullience, wit, and a wealth of little-known source material, Rehak weaves a behind-the-scenes history of Nancy and her groundbreaking creators. Taking us from The Secret of the Old Clock to The Secret of the Spa, Rehak tells all about our fearless sleuth – including the fact that both Nancy and her “author,” Carolyn Keene, were invented by Edward Stratemeyer, a dime-novel genius who also created the Bobbsey Twins and the Hardy Boys. But Nancy Drew was actually brought to life by two remarkable women: original author Mildred Wirt Benson, a convention-flouting Midwestern journalist, and Harriet Stratemeyer Adams, a wife and mother who transformed herself into a CEO to run her father’s company after he died. Together, Benson and Adams created a character that has inspired generations of girls to be as strong-willed and as bold as they were.

Edward Dolnick: The Rescue Artist: A True Story of Art, Thieves, and the Hunt for a Missing Masterpiece
(Verlag: HarperCollins)

Kurzbeschreibung:
In the predawn gloom of a February day in 1994, two thieves entered the National Gallery in Oslo. They snatched one of the world’s most famous paintings, Edvard Munch’s The Scream, and fled with their $72 million trophy. The thieves made sure the world was watching: the Winter Olympics, in Lillehammer, began that same morning. Baffled and humiliated, the Norwegian police called on the world’s greatest art detective, a half-English, half-American undercover cop named Charley Hill.

In this rollicking narrative, Edward Dolnick takes us inside the art underworld. The trail leads high and low, and the cast ranges from titled aristocrats to thick-necked thugs. Lord Bath, resplendent in ponytail and velvet jacket, presides over a 9,000-acre estate. David Duddin, a 300-pound fence who once tried to sell a stolen Rembrandt, spins exuberant tales of his misdeeds. We meet Munch, too, a haunted misfit who spends his evenings drinking in the Black Piglet Café and his nights feverishly trying to capture in paint the visions in his head. The most compelling character of all is Charley Hill, an ex-soldier, a would-be priest, and a complicated mix of brilliance, foolhardiness, and charm. The hunt for The Scream will either cap his career and rescue one of the world’s best-known paintings or end in a fiasco that will dog him forever. 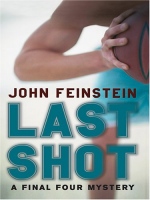 Kurzbeschreibung:
Steven Thomas is one of two lucky winners of the U.S. Basketball Writerâ€™s Associationâ€™s contest for aspiring journalists. His prize? A trip to New Orleans and a coveted press pass for the Final Four. Itâ€™s a basketball junkieâ€™s dream come true!
But the games going on behind the scenes between the coaches, the players, the media, the money-men, and the fans turn out to be even more fiercely competitive than those on the court. Steven and his fellow winner, Susan Carol Anderson, are nosing around the Superdome and overhear what sounds like a threat to throw the championship game. Now they have just 48 hours to figure out who is blackmailing one of MSUâ€™s star players . . . and why.

Kurzbeschreibung:
Paolo calls Rufus “a Mack truck with no one driving.” Rufus is the O’Neil family dog, and he shows up one morning with part of a twenty-dollar bill in his teeth.

Paolo, age twelve, figures that there must be more where that bill came from, and since his cousin Billy needs to repair a bent wheel on his bike, there’s a reason for looking. He, Georgie, and Billy end up in the monsignor’s garden behind the Cathedral of San Joaquin, but it’s not exactly treasure they find, it’s a hand that shoots out of the undergrowth to grab Paolo’s neck. The search for the stash leads the boys — sometimes scared spitless — on many a byway around Orange Grove City, California, in the summer of 1951. And onto the byway of conscience.

“Suppose you found a treasure. Couldn’t you keep it?” Paolo asks his uncle. “I mean, say you know who it belongs to, and they probably need it….But when you find it, nobody has it. Isn’t nobody’s property in particular, then,” he reasons. “Well, maybe somebody has it, but it isn’t theirs. It would be yours, wouldn’t it?”

“How in the heck is a guy supposed to be somebody in this world without any money?”

Syriana – Screenplay by Stephen Gaghan, based on the book by Robert Baer (Warner Brothers)