Verlagstext:
A twelve-year-old girl and her younger brother go on the run in the woods of North Idaho, pursued by four men they have just watched commit murderâ€”four men who know exactly who William and Annie are, and who know exactly where their desperate mother is waiting for news of her childrenâ€™s fate. Retired cops from Los Angeles, the killers easily persuade the inexperienced sheriff to let them lead the search for the missing children.

William and Annieâ€™s unexpected savior comes in the form of an old-school rancher teetering on the brink of foreclosure. But as one man against four who will stop at nothing to silence their witnesses, Jess Rawlins needs allies, and he knows that one word to the wrong person could seal the fate of the children or their mother. In a town where most of the ranches like his have turned into acres of ranchettes populated by strangers, finding someone to trust wonâ€™t be easy.

Verlagstext:
Emerson Chang is a mild mannered bachelor on the cusp of forty, a financial analyst in a neatly pressed suit, a child of Taiwanese immigrants who doesn’t speak a word of Chinese, and, well, a virgin. His only real family is his mother, whose subtle manipulations have kept him close–all in the name of preserving an obscure idea of family and culture.

But when his mother suddenly dies, Emerson sets out for Taipei to scatter her ashes, and to convey a surprising inheritance to his younger brother, Little P. Now enmeshed in the Taiwanese criminal underworld, Little P seems to be running some very shady business out of his uncle’s karaoke bar, and he conceals a secret–a crime that has not only severed him from his family, but may have annihilated his conscience. Hoping to appease both the living and the dead, Emerson isnâ€™t about to give up the inheritance until he uncovers Little P’s past, and saves what is left of his family.

Verlagstext:
Evan Delaney is a woman with a big heart, a quick tongue and a hot temper that gets her into trouble. She is shocked to discover that her ex-sister-in-law has joined The Remnant – a fanatical religious cult. And that Tabitha is trying to regain custody of her six-year-old son, Luke, currently in Evan’s care. Then one of the Remnant is killed, and Evan’s brother is the prime suspect. With her boyfriend, lawyer Jesse, Evan tries to clear her brother’s name and rescue her nephew. In doing so, she finds herself caught up in a wild plan to steal weapons, and a blazing inferno on a Santa Barbara hillside. 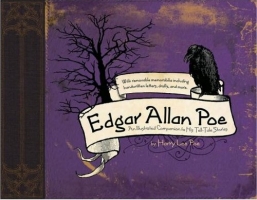 Verlagstext:
Edgar Allan Poe is often credited with creating the genres of mystery, horror, and science fiction. Edgar Allan Poe takes readers inside his world, from his adolescent poetry to his best-loved stories like „Fall of the House of Usher,“ chronicling the key events of his life along the way. The fully illustrated book will also contain six envelopes with removable reproductions of letters, early reviews, and other memorabilia.

Howard Blum: American Lightning: Terror, Mystery, the Birth of Hollywood, and the Crime of the Century

Verlagstext:
It was an explosion that reverberated across the countryâ€”and into the very heart of early-twentieth-century America. On the morning of October 1, 1910, the walls of the Los Angeles Times Building buckled as a thunderous detonation sent men, machinery, and mortar rocketing into the night air. When at last the wreckage had been sifted and the hospital triage units consulted, twenty-one people were declared dead and dozens more injured. But as it turned out, this was just a prelude to the devastation that was to come.

In American Lightning, acclaimed author Howard Blum masterfully evokes the incredible circumstances that led to the original â€œcrime of the centuryâ€â€”and an aftermath more dramatic than even the crime itself.

With smoke still wafting up from the charred ruins, the cityâ€™s mayor reacts with undisguised excitement when he learns of the arrival, only that morning, of Americaâ€™s greatest detective, William J. Burns, a former Secret Service man who has been likened to Sherlock Holmes. Surely Burns, already world famous for cracking unsolvable crimes and for his elaborate disguises, can run the perpetrators to ground.

Through the work of many months, snowbound stakeouts, and brilliant forensic sleuthing, the great investigator finally identifies the men he believes are responsible for so much destruction. Stunningly, Burns accuses the menâ€”labor activists with an apparent grudge against the Los Angeles Timesâ€™s fiercely anti-union ownerâ€”of not just one heinous deed but of being part of a terror wave involving hundreds of bombings.

While preparation is laid for Americaâ€™s highest profile trial everâ€”and the forces of labor and capital wage hand-to-hand combat in the streetsâ€”two other notable figures are swept into the drama: industry-shaping ï¬lmmaker D.W. Griffith, who perceives in these events the possibility of great art and who will go on to alchemize his observations into the landmark film The Birth of a Nation; and crusading lawyer Clarence Darrow, committed to lend his eloquence to the defendants, though he will be driven to thoughts of suicide before events have fully played out.

Verlagstext:
When Margo Roth Spiegelman beckons Quentin Jacobsen in the middle of the nightâ€”dressed like a ninja and plotting an ingenious campaign of revengeâ€”he follows her. Margoâ€™s always planned extravagantly, and, until now, sheâ€™s always planned solo. After a lifetime of loving Margo from afar, things are finally looking up for Q . . . until day breaks and she has vanished. Always an enigma, Margo has now become a mystery. But there are clues. And theyâ€™re for Q.

Printz Medalist John Green returns with the trademark brilliant wit and heart-stopping emotional honesty that have inspired a new generation of readers.

Verlagstext:
She died today. One phone call changes Jason’s summer vacation-and life! – for ever. When Jason’s grandmother dies, he’s sent down to her home in Florida to help his father clean out her things. At first he gripes about spending his summer miles away from his best friend, doing chores and sweating in the Florida heat, but he soon discovers a mystery surrounding his grandmother’s murky past. An old, yellowed postcard…a creepy phone call with a raspy voice at the other end asking, ‚So how smart are you?’…an entourage of freakish funeral goers…a bizarre magazine story. All contain clues that will send him on a thrilling journey to uncover family secrets.